I’m a historian of ancient Rome and its relations with the empires of pre-Islamic Iran. My research centers on interstate affairs between the early Principate and the Parthian empire, Rome’s imperial peer on the Iranian plateau, but I also maintain active interests in Latin literature, the Hellenistic East, and Sasanian history. In all my work, I draw on both Greco-Roman literary texts and Near Eastern sources to promote the fuller integration of ancient Persia into the study of the classical Mediterranean. In the classroom, I help students put Roman and Near Eastern history in dialogue with one another and with the historiographic mainstream, combining close readings of primary sources with comparative treatments of topics like political institutions, trade, and slavery. I also enjoy teaching the Greek and Latin texts at the heart of the classical tradition, especially historians like Thucydides and Tacitus. My interest in Near Eastern sources and in the digital humanities led to my creation of Parthian Sources Online (parthiansources.com), a digital collection of texts for the study of the Parthian empire. I currently maintain the project as PI. My CV and publications are available at jakenabel.com. 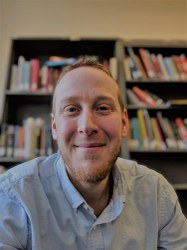